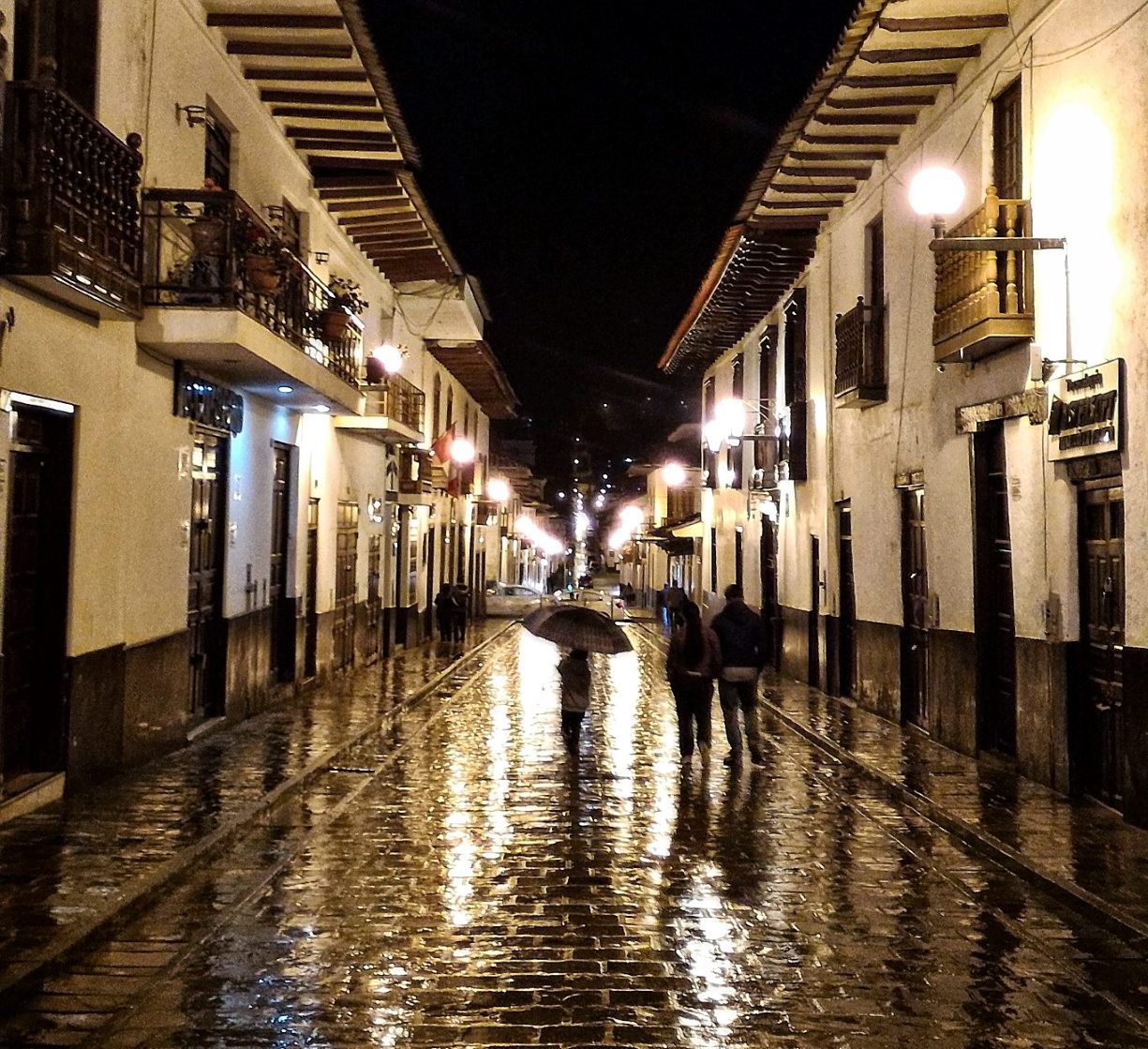 The pedestrian-only Jr. Amazonas, which begins at the Plaza de Armas of Chachapoyas and stretches for five blocks. Photo by Tony Dunnell.

Sat on the eastern slopes of the Andean range at some 2,335 meters above sea level, Chachapoyas has long been accustomed to its own isolation. Founded in 1538, just three years after Francisco Pizarro founded Lima, the secluded city has developed its own particular style: Undeniably of the sierra but touched by the selva; of both the Peruvian highlands and the jungles to the east.

Despite its relative remoteness, today Chachapoyas is stirring. The sleeping city is awakening to embrace a bright new future; its picturesque colonial streets have a certain buzz, their wooden balconies looking down on a steadily growing influx of domestic and international tourists.

This new wave of tourism has been stimulated by investment into the Chachapoya archaeological site of Kuélap and its shiny new cable car system. At the same time, new air routes are making it easier than ever before to reach Chachapoyas from the capital. And the city — with its polite and helpful inhabitants (pop. 30,000), comfortable hotels, affordable food and strangely ubiquitous taxis — seems more than ready to receive a new wave of visitors.

But before you go, know this: Chachapoyas has plenty more to offer beyond the two nationally-renowned sites of Kuélap and Gocta Waterfall. Many more archaeological sites and natural attractions dot the Amazonas region, of which Chachapoyas is the capital, and opportunities for outdoor adventure are finding a firm foothold.

New trekking, rafting and canyoning initiatives are being developed by young outdoor enthusiasts, and it would come as no surprise to me if, in another few years, Chachapoyas develops a reputation as much for its outdoor adventure activities as for its big-name attractions.

Now if only they could sort out their internet…

All photos in this Chachapoyas travel guide are by Tony Dunnell and © New Peruvian.

Things to Do in Chachapoyas and the Surrounding Area

Chachapoyas is an attractive city with photogenic streets and a pretty Plaza de Armas. And while you won’t find any must-see attractions within Chachapoyas itself, the surrounding area is full of memorable day trips to archaeological sites, natural wonders and cultural centers, most within a two-hour bus ride. 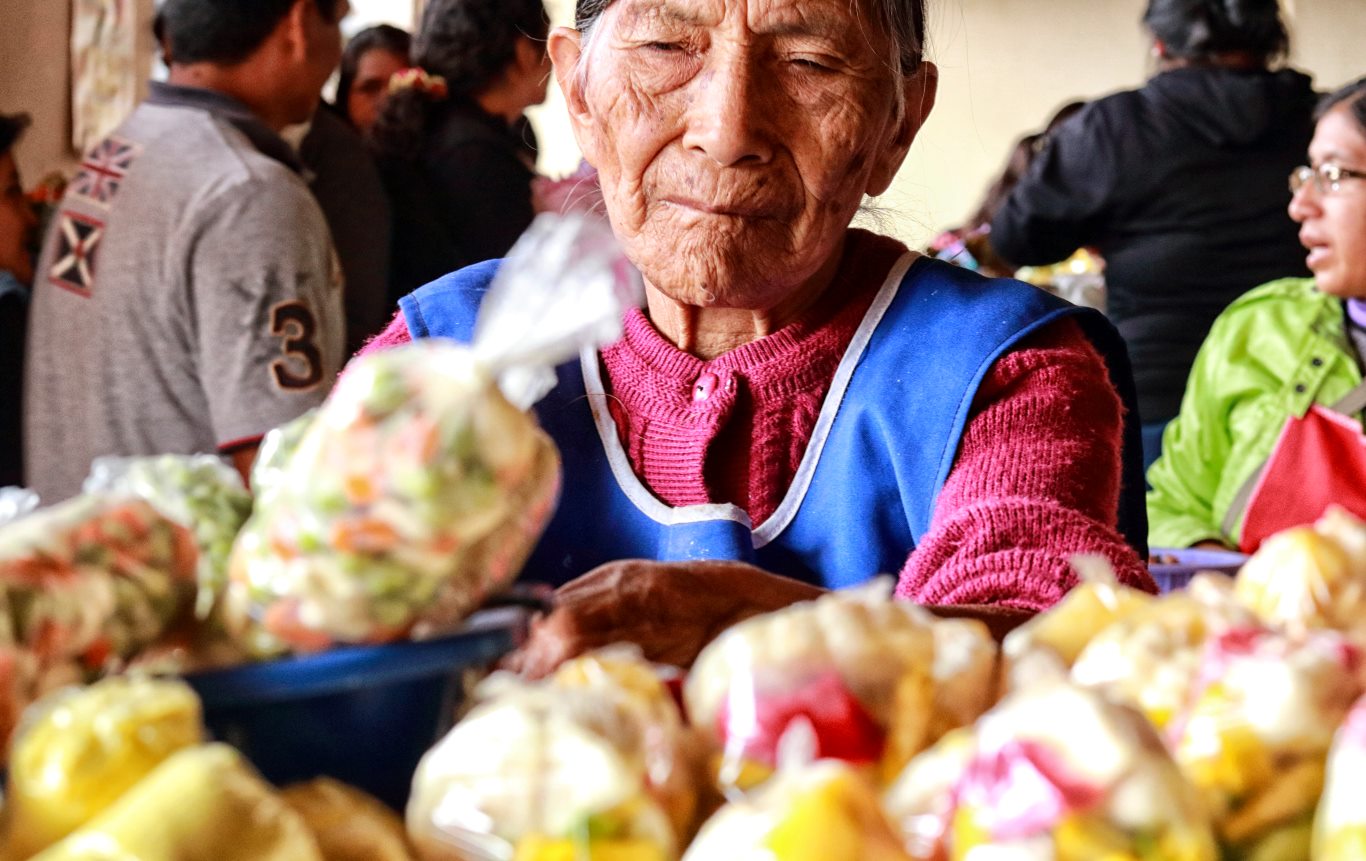 A stall owner inside Chachapoyas Market. Photo by Tony Dunnell.

Chachapoyas is the main base for exploring the most famous attractions in the Amazonas region. Kuelap and Gocta are the two classic sights, but there’s plenty more to discover. 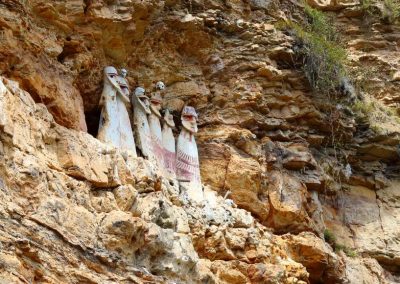 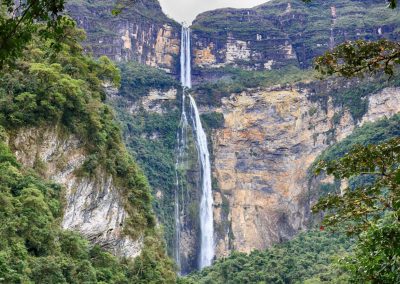 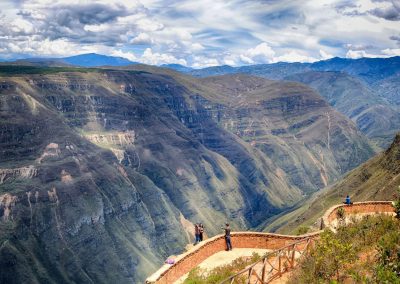 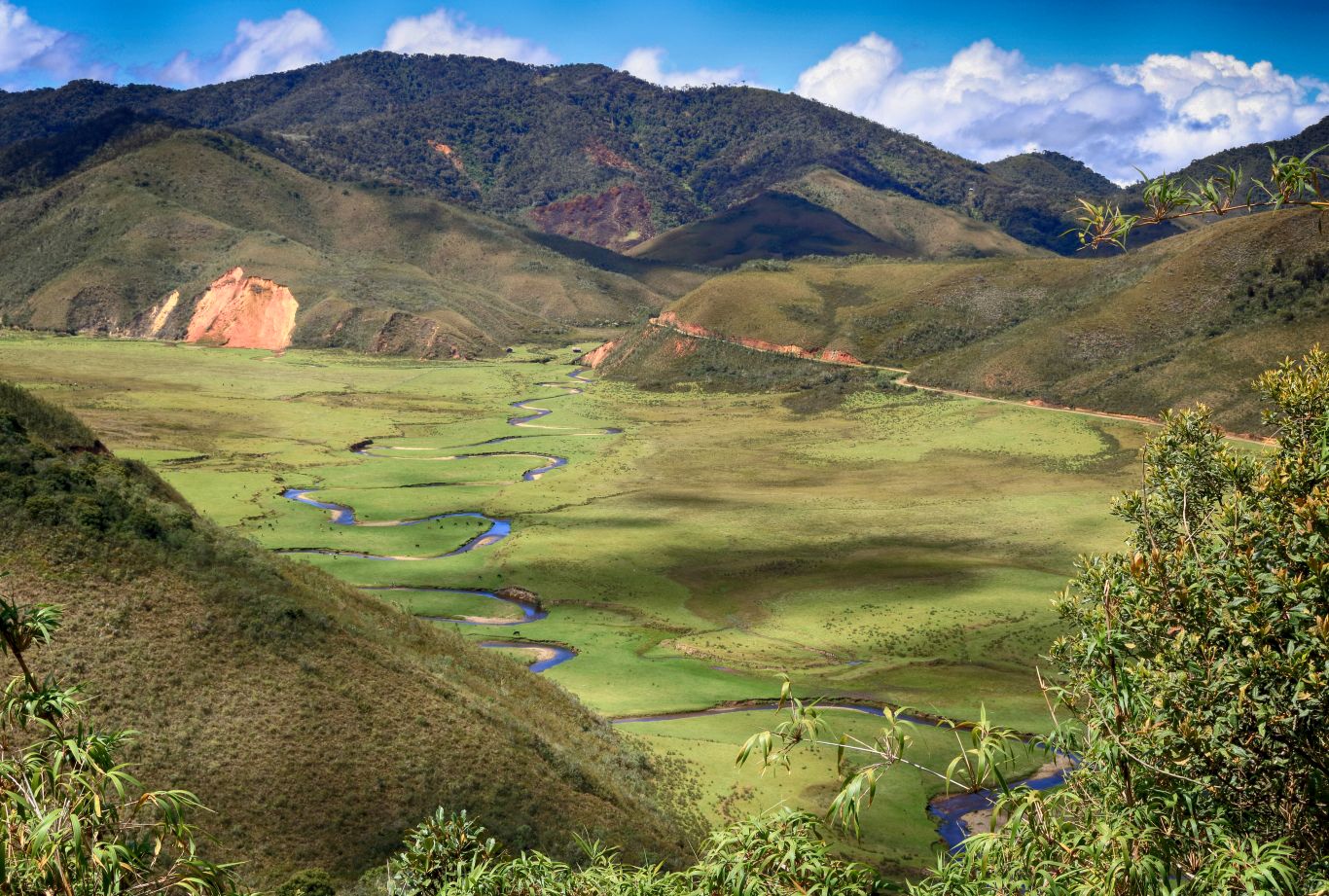 Outdoor enthusiasts will get a real kick out of Chachapoyas. Adventure sports are still in development, but the future possibilities are promising indeed. For me, the chance to trek, raft and go canyoning (and fishing) really made Chachapoyas shine as a fully-fledged tourist destination in Peru — and one likely to go from strength to strength in the next few years.

You’ll see quite a few tour agencies dotted around Chachapoyas, most of which offer the same tours. 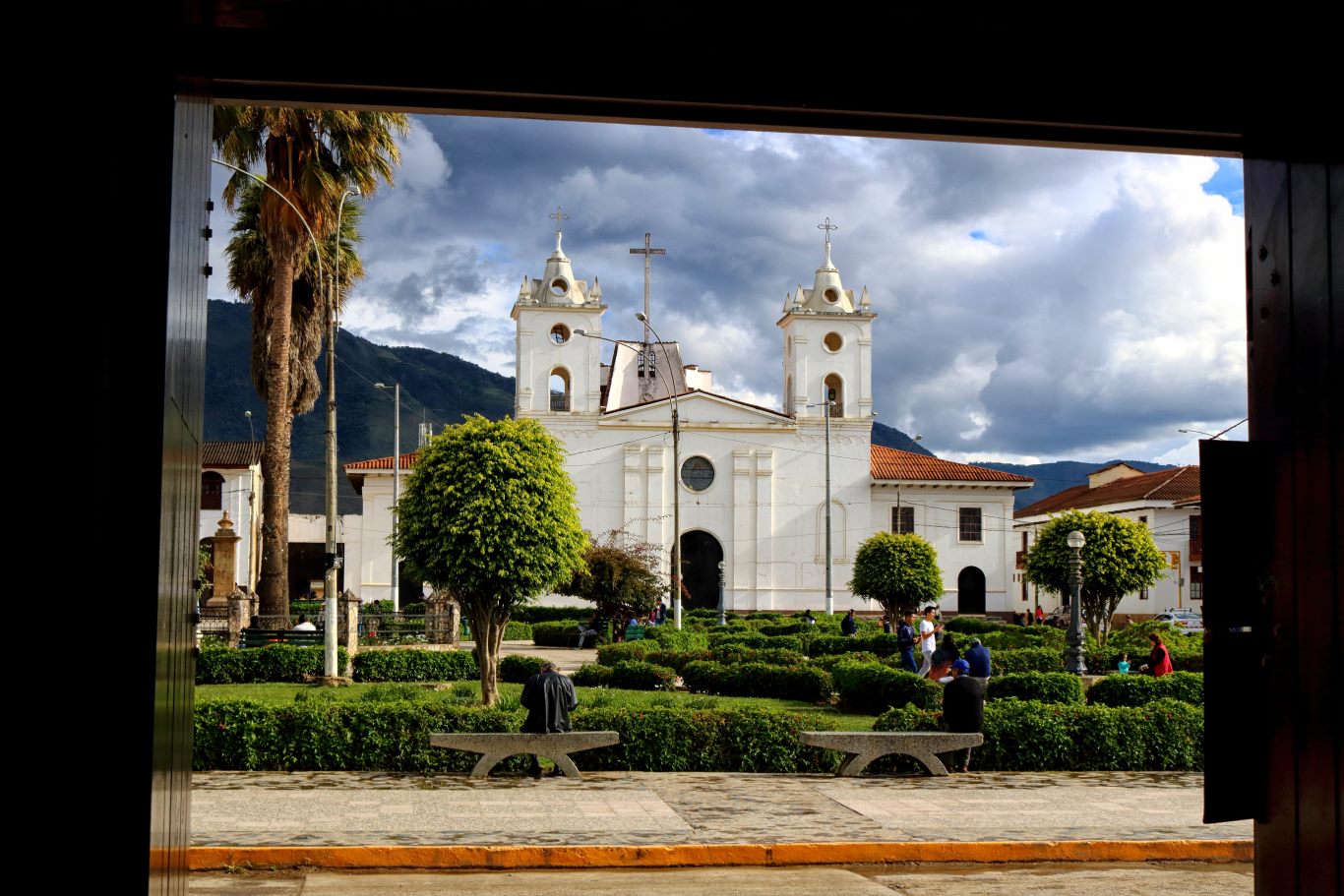 Hostels and Hotels in Chachapoyas

Chachapoyas has a good range of hostels and hotels at affordable prices. Even the upper scale accommodation options are reasonably priced, and are generally cheaper than in Peru’s major cities. Unlikely almost everywhere in Peru, most hotels and hostels in Chachapoyas don’t offer a free breakfast.

I’ve stayed at all of the hostels and hotels mentioned below, unless otherwise stated; they are ordered (roughly) from the cheapest to the most expensive. Many use Booking.com for reservations, so you can check current room rates there (prices listed below are subject to change).

Cafés and Restaurants in Chachapoyas

You can eat well in Chachapoyas, and even the most upscale restaurants are surprisingly affordable by Peruvian standards. You’ll also find plenty of cafés selling local coffee and tempting cakes. 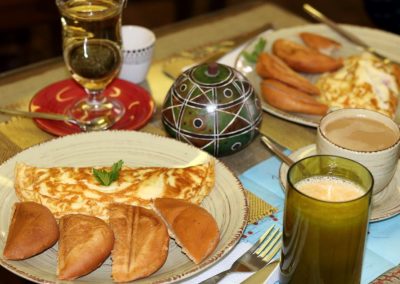 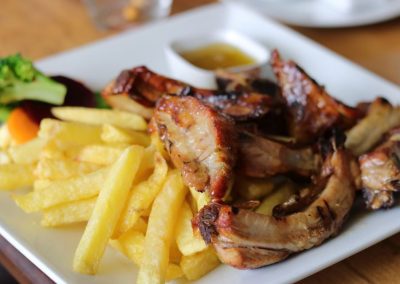 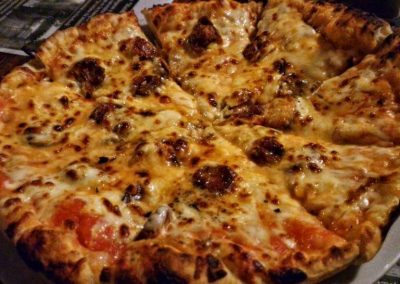 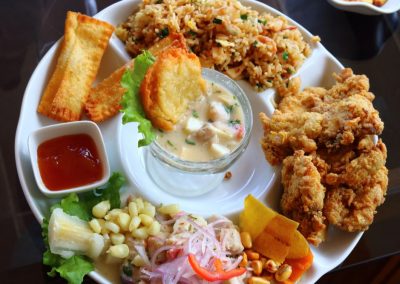 Chachapoyas is almost devoid of nightlife, so you won’t find it too hard to wake up for all those 8 a.m. tours. But when you fancy a beer — or something stronger — you’ll at least have a handful of bars to choose from, and booze is normally cheap in Chacha, too.

Getting to and Around Chachapoyas

Chachapoyas used to be one of the most isolated cities in Peru, with no regular scheduled flights in or out and limited road connections. But with all the investment in Kuélap, the Peruvian government had to make sure people could actually get to Chachapoyas without spending a day on a bus.

There are now three air options to consider for getting to Chachapoyas. You can fly from Lima to Chachapoyas with ATSA (www.atsaairlines.com) twice a week (Monday and Thursday), with one-way tickets starting at around $65.

Alternatively, you can fly from Lima to Tarapoto and then to Chachapoyas. From Tarapoto, SAETA (www.saetaperu.com) has three flights daily to Chachapoyas for as little as S/ 70 for Peruvians and other legal residents. Foreigners, however, have to pay S/ 220. Still, the flight takes just 25 minutes, compared with seven or eight hours by bus.

Or you can fly with LATAM to Jaén. Jaén is about 75 miles northwest of Chachapoyas, and around three hours by bus depending on road conditions.

Flights from Lima and Tarapoto to Chachapoyas are susceptible to delays and cancellations, especially during the rainy season from December to April.

If you’d rather take the bus, two of Peru’s major bus companies, Movil Tours and Civa, both have buses direct from Lima to Chachapoyas (22 to 24 hours, tickets around S/ 120). Or you can head to Chachapoyas from other coastal cities like Trujillo and Chiclayo.

Regular overland connections also run from Tarapoto to Chachapoyas (about eight hours) via Moyobamba and Pedro Ruiz. The road between Chachapoyas and Cajamarca is also now open, and takes about 10 hours (conditions permitting).

Getting around in Chachapoyas:

Due to its small size, Chachapoyas is easy to explore on foot, although navigating can be a little confusing for the first few days as many of the central streets look the same.

If you need to head all the way across town, then you’ll have plenty of surprisingly modern white taxis to choose from (you can get to most places in or just outside the town for three or four soles). Mototaxis are banned from Chachapoyas, which helps keep the city nice and quiet.

If you want to head further afield independently rather than with a tour, head to the Terminal Terrestre de Chachapoyas, the main bus terminal. From here, combis and colectivos (minibuses) head to most of the surrounding towns, including Nuevo Tingo (for Kuélap), Cocahuaico (for Cocachimba and Gocta), Leymebamba, Mendoza and more.

Chachapoyas seems like one of the safest places I’ve been to in Peru. That’s partly due to its small size, but also thanks to a sense of community spirit and mutual respect among the Chachapoyanos. Walking around the city center at night is very relaxed, but solo female travelers should always be a little careful walking through deserted streets after dark.

The police presence in and around Chachapoyas also seems unusually high for a city of this size. Police road checks are common outside the city, in which cars and buses are pulled over and all passengers are asked to show their ID cards. Foreign tourists are normally ignored, but it’s worth carrying a photocopy of your passport just in case you’re asked for identification.

Withdrawing and Exchanging Money in Chachapoyas

There are only a handful of ATMs in Chachapoyas (about four total, as far as I’m aware). Some of them run out of money, so it’s worth arriving in Chachapoyas with enough cash to at least get through your first day and night. You can read more about ATMs in Peru here.

There are no street money changers in Chachapoyas, so your best option for changing money is inside the Banco de la Nación on the corner of Ayacucho and Dos de Mayo, a block from the Plaza de Armas. If you’re using US dollars in Peru and need to exchange them for soles, make sure the notes are in near-perfect condition or the bank won’t accept them.

I was also told that there’s a casa de cambio (bureau de change) somewhere in town, but I never found it.

The internet in Chachapoyas is worse than in Iquitos, and that’s pretty damn bad. Some hotels have satellite internet, which is bearable as long as the weather is good. Otherwise, the Wi-Fi in hotels, restaurants and cafes is often too slow to use (or too slow to even connect).

I imagine one-day Chachapoyas will receive an upgrade to bring it up to speed with internet access across Peru, but for now it’s sadly lacking.

Chachapoyas has a temperate climate with a fair amount of rain. The rainy season tends to run from the end of October to April, with May to September being the driest months (and therefore optimal for most tours and outdoor activities).

Major Festivals and Events in Chachapoyas

If you have additional information or extra recommendations to help expand and improve this Chachapoyas travel guide, then don’t hesitate to leave a comment below. All opinions and points of view are more than welcome. Thanks!