Nearing sunset at the floating restaurant Al Frío y Al Fuego in Iquitos, Peru (photo by Tony Dunnell)
Iquitos is not like any other city in Peru.

It’s hot and humid like a typical jungle town. And it’s full of motorbikes and mototaxis, another classic attribute of a city in the Peruvian Amazon. The locals are happy despite the heat; they like cold beer and they like to laugh loudly. Classic Peruvian jungle.

But its geographical isolation has given rise to a unique feel and function, a sense of being in a large and established outpost on the extreme edge of regular life.

Iquitos is the largest city in the world that can’t be reached by road, only by river and air. It’s a three- or four-day boat ride to the rest of Peru, either southwest to Yurimaguas or south to Pucallpa. Further east, meanwhile, lie 900 miles of dense jungle until Manaus in Brazil, and a further 800 miles thereafter to the city of Belém at the mouth of the Amazon River.

Before the Old World came crashing into the New, the region where Iquitos now sits was home to nomadic Amerindian hunter-gatherers, people whose lives were tied inextricably to the jungle and its rivers. Then, in the mid-1600s, Jesuit missionaries began to arrive, bringing their brand of Christianity and foisting it upon the native population, who they placed in reducciones or Missions. By the 1730s, these Missions spread along the Marañon, Napo and Amazon rivers, including what were known as the Iquitos Missions.

In 1864, the Peruvian government chose the village of Iquitos as the site for a strategic river port. Then the rubber boom hit, and the small port settlement underwent an incredible expansion. People and companies began to pour in from across the world, from poor young workers to wealthy European industrialists and entrepreneurs. It took an Englishman to bust the boom: In 1876, Sir Henry Alexander Wickham took 70,000 seeds from rubber trees in Brazil to the Royal Botanic Gardens of Kew in London. These same seeds then traveled to plantations in Ceylon, Malaya and other tropical destinations, bringing an end to the Amazonian rubber boom.

That’s a lot of history in a short space of time. And Iquitos is all the more interesting for it. European mansions, faded but far from dilapidated, dot the streets, rubbing shoulders with traditional jungle markets. Modern cafes and restaurants have sprung up along the pretty riverside boulevard, not far from the simple stilted wooden homes of the largely poor Belén district, known, somewhat ironically, as the Venice of Iquitos.

Indigenous and colonial have mixed and metamorphosed in Iquitos. And now modern tourism brings in the international crowd, from carefully guided lines of package tourists who come to cruise the Amazon, to adventurous backpackers who want to explore Iquitos and maybe sign up for a budget expedition into the surrounding jungle.

It’s a big old mix, that’s for sure, and there’s rarely a dull day in Iquitos, capital of the Loreto Region of Peru. 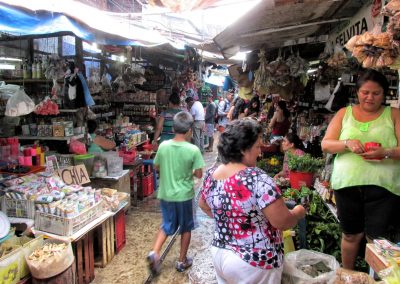 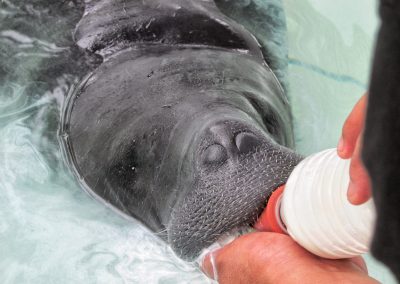 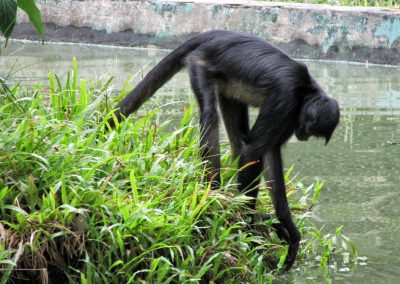 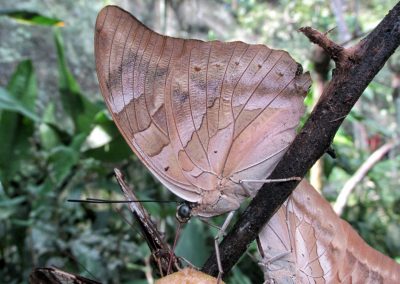 Things to Do in Iquitos

Apart from going on riverboat cruises and other jungle excursions, you’ll find a reasonable amount of things to do in Iquitos and the surrounding area. Some of them can be done together, such as the Manatee Rescue Center, Quistacocha and maybe even the Amazon Golf Course, as they are all quite close to each other. 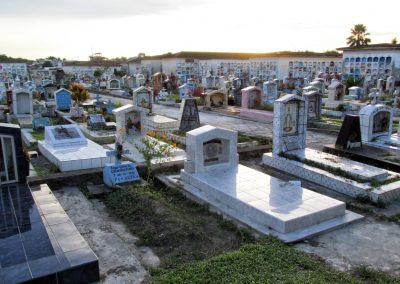 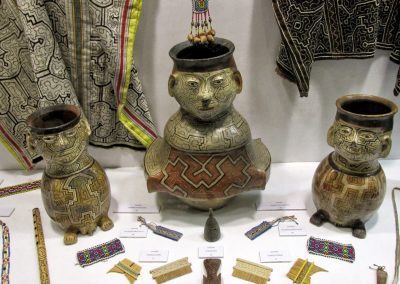 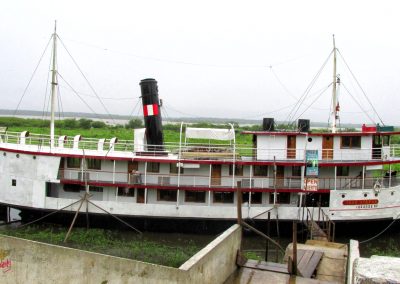 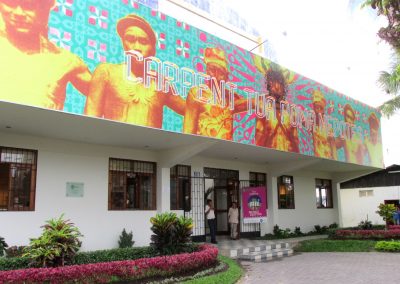 Where to Stay in Iquitos

Iquitos has hostels and hotels to suit all budgets, but the hostel scene seems slightly lacking, not in numbers – you’ll find plenty – but in general quality. Relaxing in the Amazon Bistro in Iquitos, Peru. Photo by Tony Dunnell.

The Best Restaurants in Iquitos

Some of my friends disagree with me on this, but I think Iquitos is a great city for food. Being such an isolated place, there’s extra reliance on local produce from the jungle and the river, making the culinary scene particularly interesting. And it seems like most restaurants buy the bulk of their ingredients from Belén Market each morning. A statue of Eliseo Reátegui Vásquez on the riverfront boulevard in Iquitos. Eliseo, who died in 2001, is known in Iquitos for two reasons: He was a proponent of Amazonian folk music with his band Los Solteritos. He also founded the Shambo ice cream and chupete company, a famous brand from the Peruvian Amazon. Photo by Tony Dunnell.

I mainly stuck to the bars in Iquitos rather than nightclubs, but there are some trendy clubs like Noa (Calle Fitzcarrald 298) if you feel like dancing. Also keep an eye open for outdoor musical events, which can attract a large crowd.

Getting to and Around Iquitos

As mentioned above, getting to Iquitos is by boat or by plane, with no overland options.

You can fly directly to Iquitos from Lima, Tarapoto and Pucallpa. All of Peru’s largest domestic airlines — Star Perú, LATAM and Avianca — fly from Lima to Iquitos, sometimes landing in Tarapoto en route. Tickets normally cost between US$80 and $120.

You can catch a large and slow passenger boat to Iquitos from Yurimaguas or Pucallpa. The trip takes three to four days, with hammock space costing anywhere between S/ 60 to S/ 100, or S/ 150 to S/ 300 for a tiny cabin. Basic meals are included.

You can also take a lancha rápida — a smaller, faster boat — from Yurimaguas to Nauta (from where you take a bus to Iquitos) or vice versa. It takes about a day and costs between S/ 140 and S/ 200 (about $45 to $60). It’s not comfortable, but it is quicker.

Getting around in Iquitos is by mototaxi or minibus. The buses are old and can be hot and cramped, but they get you to most of the attractions listed above. Passenger boats for short trips from the city can be found at the Bellavista Nanay Port about three miles north of the city center. I took this photo when I went into the Belén district of Iquitos with a friend who was installing free water filters in poor households. Acrid smoke from an open fire drifted through the stilted home. The kid was friendly but shy.

The center of Iquitos is safe during the day and fairly secure at night, although it’s best to walk around at night with a friend or two. Things can get sketchy further away from the center, especially at night, so best to take a taxi.

People will tell you not to walk around without a guide in the Belén district and Belén Market. I walked around Belén Market alone, with my camera, and didn’t feel unsafe at all — apart from when I walked out of the extreme lower end of the market, where a couple of locals approached me and told me to be careful. As for the Belén district, you’ll get much more out of it if you go with a guide who grew up there — and you’ll be safer.

Slow, slow, slow. The internet in Iquitos is way better than it used to be, but it’s still aggravatingly slow even by Peruvian internet standards. That’s understandable, being a city in the middle of the Amazon Rainforest. Connections aren’t entirely useless, but you’ll find yourself cursing quite a lot of you’re trying to get work done online.

The weather in Iquitos is hot, humid and hot. It’s a tropical wet climate with an average temperature of about 27 °C (80.5 °F). The rainy season runs from November and ends in May, with March and April typically having the heaviest rains and highest humidity (the Amazon River reaches its highest levels in May). Less rain falls in July and August, although downpours are still common.

Major Festivals and Events in Iquitos

If you have any information or recommendations to add to this Iquitos travel guide, feel free to leave a comment below. All opinions are more than welcome. Thanks!