Orphaned Manatees at the Amazon Rescue Center in Iquitos, Peru Bottle-feeding milk to an orphaned manatee at the Amazon Rescue Center in Iquitos, Peru. Photo by Tony Dunnell.

The orphaned baby manatee stuck his grey snout out of the water and took another bite from the thick aquatic leaf I was offering. Munch, munch.

His little whiskers moved up and down as he chewed, gummy and toothless, with gusto. Mucho gusto. Crunch, crunch.

I’d come to the Amazon Rescue Center in Iquitos after a depressing walk around the nearby and presumably underfunded Quistacocha Zoo. Quistacocha, with its lakeside beaches, sun loungers and caged Amazonian wildlife, is a popular spot just outside the isolated jungle city. But the sight of animals pacing in circles in cramped cages, depressed and often alone, had tainted the whole experience.

And so it was, in a funk and far from inspired, that I went a short way down the road to see if the Centro de Rescate Amazónico (CREA), or Amazon Rescue Center, was any more uplifting.

I paid for my ticket at the entrance and followed a group along a path through the trees, heavy drops of golden sun filtering through the leaves and dripping through the shade. We passed a small clearing in the woods, where the smiling Guardian Tree watched over new arrivals like one of Tolkien’s Ents.

Further on, some monkeys, running free, were obviously up to some mischief. They had an enclosure, but for now they were allowed outside.

Then we passed out of the wooded area and came to some manmade pools of clear water, in which fat little things bobbed and lounged like chubby little Atlantean princes. I watched as a staff member bottle-fed one of these orphans, a helpless baby manatee who would have had little chance — if any — of surviving in the wild.

This was one of the quarantine pools for newly-rescued orphans. Here the manatee calves would receive veterinary treatment and drink milk from the bottle.

A milk-slick ran into the water from the mouth of the grey-skinned baby, a focused but messy eater. He breathed through his nose as he sucked on the bottle, his nostrils opening and closing while his mouth stayed firmly fixed on the bottle’s teat. 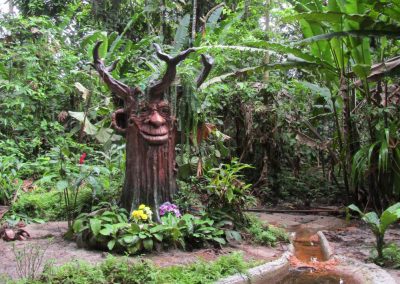 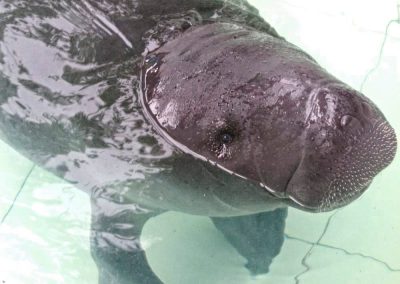 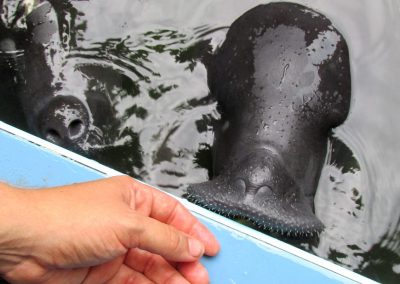 We moved on to a nearby set of pools. These were of darker, shadier water, where slightly older infants were slowly swimming. This was the weaning area, where the manatees drink less milk and eat more aquatic vegetation.

“Would you like to feed them?” asked the smiling staff member who was leading us through the grounds. He handed me a pot of thick aquatic leaves and immediately a couple of manatees swam over in expectation of food.

I knelt by the pool and two short, whiskered snouts popped out to probe the air. I offered a leaf and both baby manatees brought their heads halfway out of the water, their strange upper lips — large, flexible, and prehensile — reaching out finger-like to gather the food. The closer of the two took the leaf. The second manatee moved off to try his luck with some other humans who had knelt by the pool with another pot of food.

The manatee below me sniffed loudly and impatiently through his large nostrils, asking for more. I complied, and he happily demolished my entire pot, his toothless mouth drawing in the thick leaves like logs into a lumber mill.

Watching him eat was fascinating, almost hypnotic. His short whiskers moved and twitched with his stubby snout and probing lips, his small eyes fixed and occasionally blinking, his eyelids closing in a strange circular manner, another peculiarity of the manatee. I ran my hand along his wet skin; it was smooth but tough, like the skin of a young elephant.

Baby manatees do not have teeth, at least nothing developed enough to be of much use. Even when they’re released from the center and grow to adulthood, these rescued orphans will still only have about six teeth along each jaw, with no incisors or canines, just a row of molars. The molars are slowly but continuously replaced, with new teeth growing at the back and moving forward like a conveyor belt as the older teeth fall out at the front. This strange system of tooth renewal is found in only three mammals: manatees, kangaroos and elephants.

When he’s ready, this manatee will move from the weaning pool to the pre-release area. There he’ll only eat aquatic vegetation and will share the lagoon with other animals — but with no direct human contact — where he’ll grow to about 100 kg (a fully-grown adult can weight 350 kg or more). And then, when he’s at least three years old, he’ll be ready for release.

Some say that ocean-dwelling manatees — not this freshwater Amazonian species — may have inspired myths of sirens and mermaids among weary, bleary-eyed sailors. Looking at these fat little fellows, it’s hard to associate them with the Disneyfied image of a mermaid. I’m sure Ariel, at least, would develop quiet a complex if she was compared to such a creature.

But for me, in all my time in Peru, I’ve seen few things — living or otherwise — more beautiful than these orphaned manatees. And in turn, few enterprises more worthy or more deserving of support than the Amazon Rescue Center in Iquitos, Peru.

Learning More About the Amazon Rescue Center in Iquitos

In the Amazon, as in other parts of the world, humans pose the greatest threat to the three species of manatee (Amazonian, West Indian and West African). This is often through habitat destruction and collisions with motorboats, including hull impacts and cuts caused by propellers. In the Amazon, however, other, greater threats exist:

“The greatest threats to manatees [in the Amazon] are hunting, especially of adult manatees,” says Cris Vélez, a board member of the Amazon Rescue Center and the Coordinator of the Environmental Education and Tourism Area. “They have been hunted for hundreds of years and this still continues in some Amazonian villages. People kill them for food or use the manatee’s meat to catch fish. If they hunt an adult with a baby, they’ll try to sell the baby manatee as an exotic pet.”

I asked Cris via email to tell me more about the Amazon Rescue Center and its ongoing efforts to help rescue, protect and then release orphaned manatees: “The center can care for 10 manatees in the quarantine and weaning areas, but we have a pre-release area where the bigger manatees are. The number of manatees [we] rescue per year changes according to the year; we have rescued 40 manatees since 2007.”

And where do these manatees go when they’re old enough to leave the center?

“All of the manatees released so far were released in natural protected areas like Pacaya Samiria National Reserve and Tamshiyacu Tahuayo [Regional Conservation Area]. We move them there by boat or airplane. Manatees can stay out of the water for up to one day with wet skin; the trip takes us 40 minutes by plane or three hours by fast boat.

“Before and after releasing them, we work with the communities near the release lagoon. Usually the lagoon is far from the villages, but it is part of the conservation effort and one of the main objectives of CREA to raise awareness among the Amazonian population. All the manatees have a belt in their tails when they are released, and we track them for at least 6 months.”

Running a center like the Amazon Rescue Center is no easy task, and Cris and his colleagues receive minimal help from the Peruvian government. “The only help we receive from the government is through the Instituto de Investigaciones de la Amazonía Peruana (IIAP),” he told me. “They are part of the government and give us a piece of land inside their facilities. Our funding comes from the Dallas World Aquarium Zoo; they are the main funder of the project. Other funding comes from the tourists that visit CREA; they have to pay a fee to get in and that income allows us to improve the facilities.”

Finally, I asked Cris how people can help the Amazon Rescue Center and the orphaned manatees: “People can help us by spreading the word about what we do to try to conserve a vulnerable species; they can visit CREA or contact us through our website or Facebook if they want to donate; they can also volunteer here. Most important: Do not buy wildlife as pets.”

Thanks Cris, and many thanks to the Amazon Rescue Center for doing what it does.

All photos and video by Tony Dunnell.