Tipping in Peru: How Much to Tip Guides, Waiters, Taxi Drivers and More 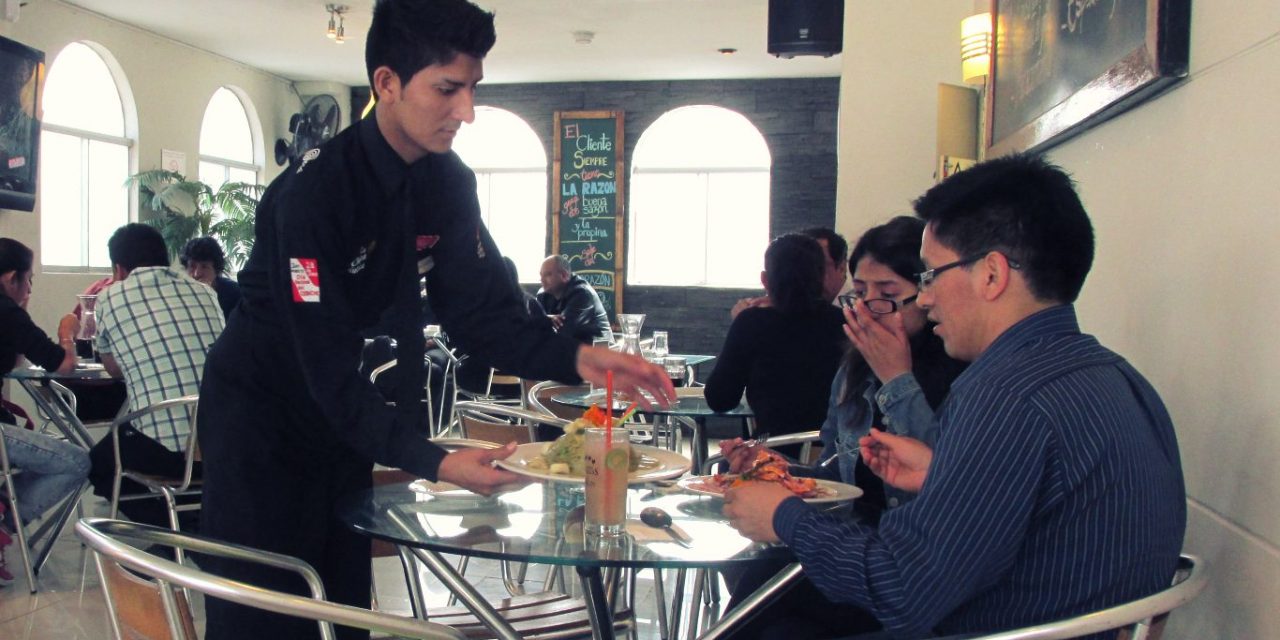 No fixed etiquette exists for tipping in Peru. It’s not a tipping culture, so you won’t be leaving a tip, or propina, on a regular basis, unless you’re staying at the most expensive hotels, eating at upscale restaurants, and generally sticking firmly in the tourist scene. Oh, and those llamas don’t pose for free.

Tipping in Restaurants in Peru

You don’t always have to tip in restaurants in Peru, at least not nearly to the same extent as in tip-focused countries like the USA. Upscale restaurants in Peru might include a service charge (between 10% and 15%), so always check your bill. If the tip isn’t included, then it’s expected that you’ll leave a tip of up to 10% for your waiter if the service was good. If it wasn’t, then you don’t have to leave anything. The service in Peru can be terrible, even in expensive restaurants; but the waiter probably hasn’t had much training, so keep that in mind before withholding a tip.

Many Peruvians won’t leave a tip in cheaper restaurants, including, for example, family-run restaurants selling lunchtime menús, pollerías (chicken restaurants) and chifas. But the waiters in these restaurants are often paid very little — often less than the minimum wage in Peru — so a tip of two or three soles is always appreciated.

As a general rule, a 10% tip is a welcome gesture for good service in any restaurant in Peru. But if you’re on a really tight budget, don’t feel you have to tip in the cheaper restaurants, especially if the service is subpar.

Tipping Hotel Bellhops and Other Staff

If you’re staying in a four- or five-star hotel, then you should probably tip the bellhop about S/ 3 to S/ 6 ($1 to $2) per bag. If the doorman helps you unload your bags from the taxi, consider tipping him S/ 2 to S/ 5. A small tip for housekeeping is a nice gesture at the end of your stay; you can leave a few soles on the nightstand or table in your room.

In cheaper hotels, tip the bellhop (if there is one) a sol or two per bag.

No tips are expected in backpacker hostels, but you might want to tip individual staff members if they are particularly helpful.

You don’t need to tip taxi drivers in Peru. If they are particularly helpful, or if they carry your bags for you, then you could give them an extra sol or two. But it is not expected in any way, so if a taxi driver does ask for a tip, feel free to say no. If he demands a tip, which happens sometimes with taxi drivers in Lima, then tell him to get stuffed. He’s probably overcharging you anyway.

Tips aren’t necessary for mototaxis either. Mototaxis are common in the Peruvian jungle and their drivers rarely, if ever, ask for tips, unless you make them wait for a while in a particular spot (which is really just an extra charge).

A taxi driver waits for a passenger in Miraflores, Lima
(photo by Tony Dunnell)

You never need to tip a bus driver in Peru, no matter how big or small, old or modern the bus. A couple of bus baggage handlers have asked me for a tip in the past, just for putting my backpack in the hold. That’s a scam, so don’t give them anything.

You should always tip your tour guide in Peru, be it a two-hour tour of a museum or cathedral, or a four-day tour of the jungle. It’s always tricky to know how much to tip, so just go with your gut.

For a short tour of an hour or two, S/ 10 soles per person is often enough — but again, it depends on the complexity of the tour and the amount of information being offered by the guide.

For tipping Inca Trail guides, see the link in the section below.

How Much to Tip Peruvian Porters and Other Trekking Staff

This is a tricky one, so I’ve written a separate article all about tipping guides, porters, chefs and drivers on the Inca Trail. The tipping rates discussed in the article apply to many other treks and tours in Peru. When Tipping in Peru Becomes a Request

Sometimes, tipping in Peru creeps up on you like a llama in the dark. And sometimes, it spits.

For example: You’re in a colorful market, taking photos of the aisles of multihued knitwear. All of a sudden, an elderly lady, who may have been accidentally caught in the corner of a photo, sticks out a hand and asks for a tip or propina. You can mumble and pretend you don’t understand while quickly shuffling away, or you can give her 50 céntimos. Or, make sure you ask permission for the photograph beforehand, just so you know where you stand.

The same applies with llamas. In tourist hotspots like Cusco, you’ll often see a traditionally-dressed Andean woman standing or walking in the street with a beautifully ornamented llama. But they are not just standing there for fun. If you take a photo, expect to pay. This will often be in the form of a tip, in which case one or two soles should do.

Another random tipping request can occur when you innocently ask someone for directions. You might receive a swift and possibly unreliable answer, after which the local (normally a young man or precocious kid) asks for a tip. Or they’ll insist on showing you the way, and then they’ll ask for a larger tip. If they’re actually helpful, then maybe a small tip (50 céntimos or one sol) is OK. But otherwise, this isn’t a situation in which you need to be tipping in Peru.